Ever been told that you’re a grammar snob, that your pedantry over correct usage is out of touch with colloquial humankind? (It’s not, “can I go to the bathroom,” rather it’s “may.”) Get out the schadenfreude, because the milkmen and women of Maine have brought a successful challenge to the dairy industry because some lawmaker didn’t check the grammar books!

I’m talking about the Oxford Comma. In Maine, the dispute over the meaning of an overtime law came down to the placement of said comma. Dairy delivery drivers were seeking overtime pay. It was understood that the overtime law did not apply to food production and all related industries around it, but the law was ambiguous when it came to distribution.

The language not being clear, the court decided to side with the drivers.

I spent St. Patrick’s day at a science fiction book club discussing John Scalzi’s Redshirts with a bunch of guys my dad’s age.

Just to contrast ourselves to socially amiable people wearing greenshirts. Also there was no booze, also fanny packs were present.Why are you asking how high school went? Why is that relevant?

Shirt color aside, Redshirts was amazingly fun and hilarious. 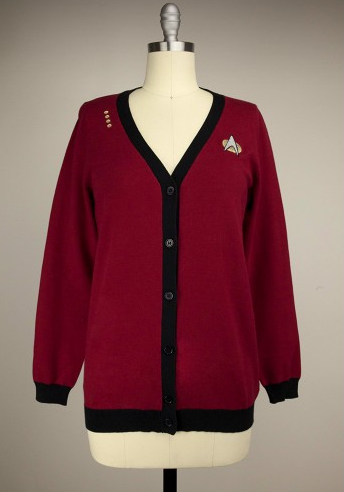 “The pulse gun is ineffective against Borgovian Land Worms!” Davis heard Science Officer Q’eeng say over the unspeakable noise of thrashing worms. “The frequency of the pulse sends them into a frenzy. Ensign Davis has just called every worm in the area!”

You couldn’t have told me this before I fired? Davis wanted to scream. You couldn’t have said, Oh, by the way, don’t fire a pulse gun at a Borgovian Land Worm at our mission briefing? On the ship? At which we discussed landing on Borgovia? Which has fucking land worms?

I needed it. Read it if you find yourself needing a laugh.

He looked down at his phone. “Car will be here soon,” he reported.

“What color is the car?” she asked, standing on her tip-toes to get a clear view of the road from the peopled sidewalk.

“It says black.” He replied.

“What’s the license plate number? Do we have the driver’s name?” She asked.

“Man, you really check them out, huh?”

I’ve been watching Riverdale lately and I’m struck by how so many parts of the show appear to be written by adults engaging in wish fulfillment. What if Archie, a character from a silly comic book your grandparents read, was a hot football player and song writer having an affair with his attractive music teacher? What if Betty was the unrequited girl-next-door who also had a dark, sexy side, and she handcuffs a football player to a hot tub in a fit of pique?

This kind of sensationalism might be something teen dramas can fall into (I’m thinking Gossip Girl, etc.). My problem with it is the lack of verisimilitude. We might all wish we could be this version of Archie or Betty. But a good story resolves those tensions by showing the push and pull between dreams and reality. Failing to do so reduces the medium to maudlin nonsense or pedantry. Without contraries, no progression.

Let’s look at another category of teen dramas: Buffy the Vampire Slayer and the Breakfast Club. These stories resonate more because they tap into something real about the teenage experience. They treat the liminal stage between childhood and adulthood as something worth respect: there’s witty dialogue, heavy problems, the desire to guide oneself yet be guided. They make you laugh and then cry.

I have high expectations for teen characters, and as a lifelong reader of Archie Comics, Riverdale is falling short.

In 2011 I was one of those people. I left a one star review for Ursula K. Le Guin’s novel Lavinia. My problem with it was that, in my mind, she just rewrote the Aeneid.

So, I wondered, what was the point of rewriting the entire epic from Lavinia’s point of view? There was something unremitting about the narrative, and I had hoped for something fresh. Instead of a new tale I saw Lavinia go through the motions of Virgil’s canto, and frankly, I had already read that.

I’m not that much older or wiser now, but I have had a bit of an epiphany about this work. The tribute Le Guin makes to epic literature is on the nose (oh yes, even with references to Dante and his Virgil), but it’s not the point. The point is that the feminine point of view isn’t useless or unimportant, it’s just different.

“Without war there are no heroes.”

“What harm would that be?”

“Oh, Lavinia, what a woman’s question that is.”

The feminine, in this book, is about constancy in tribulation. It is a source of energy that never burns too brightly and all at once, like the glory of a male warrior, but steadfastly like a warm coal. A man’s stubbornness is a weakness, something dogged and without joy.

“Men call women faithless, changeable, and though they say it in jealousy of their own ever-threatened sexual honor, there is some truth in it. We can change our life, our being; no matter what our will is, we are changed. As the moon changes yet is one, so we are virgin, wife, mother, grandmother. For all their restlessness, men are who they are; once they put on the man’s toga they will not change again; so they make a virtue of that rigidity and resist whatever might soften it and set them free.”

I once had a philosophy professor point out that feminine traits are often equated with something undesirable when men show themselves to have them. Even crying, he said, can be something men are conditioned to be ashamed of. This is a prison. Closing all of the doors only makes a person adapt to living in the dark, and we know how those odd, blind creatures in caves strike us, no?

Revel in the feminine. Be free. Be whole. And understand the point of re-imagining an epic story so often dominated by the male gaze.

My short, “A Packhorse For Your Silly Memes” is included in this anthology. I’m excited! I describe it as’ Science Fantasy.’

“I am eating dinner very contently when my fetus interrupts my thoughts.”

Edited by L.A. Little and cover design by Mark Fussell.

But, I am able to share good news for once: I sold my first short story, to be published in a Science Fiction Anthology either this Dec or Jan.  The contract is signed and the publisher working away on the printing.  I’ll share the details once it’s put up for sale.

Honestly, this is amazing news. I’ve worked very hard to get here, and hopefully this is the start of a writing career. I have several other subs out, so I’m hoping to keep up the momentum!

This particular story was rejected 6 times- but the sub times were long. One publication held it for five months, so I lost some time there. I finished the story in March 2015, after it went through eight drafts. The rewrites were helped along by Critters (I’ll report to them this “Woohoo!” once published) and one last, very incisive critique by a major magazine editor.

Making art is hard work. Lots of rejection, lots of technical and creative skills required, many late nights spent just trying to hit a word count so that they day can be considered well spent.

So, here’s to my little story. Hurrah!